It was an iron collar fastened by a short chain to a wall, often of the parish church, or to a tree. The collar was placed round the offender's neck and fastened by a padlock. The jougs was practically a pillory. It was used for ecclesiastical as well as civil offences. Examples could still be seen in Krakow on St.Mary's Church walls. Penalty abolished in 1777 when the reforms introduced by Joseph II, always requiring the elimination of all jougs.In Krakow, the penalty has been eliminated in 1779. On the other Polish territories survived to the nineteenth century.

Fire Extinguishers
to  the torches 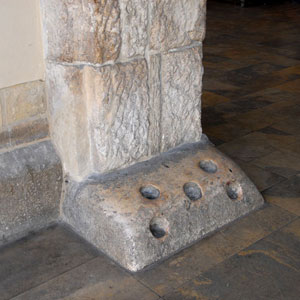 In several places in Krakow survived to this day extinguishers to the torch, illuminating the streets once by moving the inhabitants of the city after dark.
Houses in Old Town have got a specially stone in the form of solids with holes, in which each has to put out the torches before entering the house.
Extinguishers to the torches can be seen today at tree points in Krakow - the entrance to Cloth hall, also at Sławkowska and Kanonicza Street.

The Bugle of the St.
Mary's 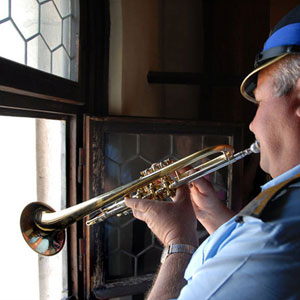 Every full hour a golden trumpet shows above Krakow’s Main Square in the window of the higher tower of the St. Mary's Church. A characteristic trumpet melody, known to every Pole, resounds all over the Old Town of Krakow. A suddenly music comes to an abrupt end. The bugle call is played towards the east, the south and the north. At noon the whole ritual is broadcast on the Polish national radio from 1927. The same became Bugle to the oldest radio program broadcast in Poland continuously since 1927 It is - beware, beware! - the oldest world music radio show!

The iron chains on the Florian Str. 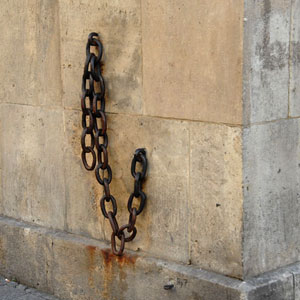 Iron chains are embedded among others in the house by Florianska street (intersection of the St. Thomas Street). They were used to close the street in case of appearance of the enemy. Another theory is that the chains were used to close the night crossings in the city, to enforce a ban on movement of sled riding. The earliest mention of such chains is known from the XIV century. 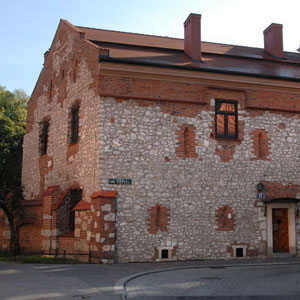 Church of St. Cross comes from the fourteenth century. It is the only sacred building in Krakow vaulted palm. Right next to the medieval Church of St. Cross at 23 St. Cross Street is early Gothic rectory building. The building was erected of lime stone and brick. To this day, are noticeable in the walls of the elements of the defense. The house is considered the oldest preserved dwelling house in Kraków. 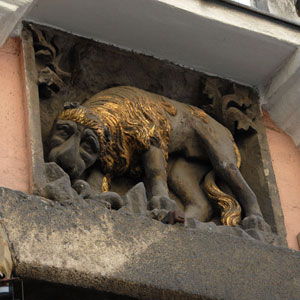 In ancient times houses did not had the numbers - for determining the adress of the house was used the owner's name or the name of the motive placed on the facade as the house emblem - animal or vegetable. The oldest - the fourteenth century emblem of the house in Krakow is located at 32 Grodzka Street. The emblem represents the medieval image of a stone lion, probably made on the basis of verbal messages and old engravings - his face differs slightly from the face of a lion. Since the emblem was the name of the house "Under a Lion".

The Trivia of Krakow during the City Game. The Unknown Krakow, but we know Krakow!